Although he never received any awards or recognition during his lifetime, Richard Etheridge’s story is one that continues to inspire anyone who hears it today. No matter the challenge, he found the strength within himself to overcome. Through his incredible discipline and drive, Etheridge made the unimaginable leap from slave to the first African American Keeper in the United States Life-Saving Service (USLSS).

Born on January 16, 1842, Etheridge was raised along the shallow waters on Roanoke Island, N.C. as a slave. By the time he was a young man, the Union Army had freed slaves on Roanoke Island and Etheridge decided shortly after to join the war efforts. He enlisted in the Second North Carolina Colored Volunteers and was appointed as one of the sergeants in Company F. After serving in Virginia for 3 years, Etheridge returned to his hometown after the Civil War ended in 1865. Post war, he worked as a fisherman, learning to navigate the ever changing tides and unpredictable weather conditions on the Outer Banks.

Service as a Surfman

Ten years later in 1875, Etheridge returned to a life of service and became a surfman in one of the USLSS stations that recently opened on the Outer Banks. He was assigned to the Bodie Island station and served with a crew made up of both black and white surfmen. On a crew of six, he held the lowest ranking position. Through his own discipline and determination, Etheridge did not hold that position for long and soon earned a reputation as an outstanding surfman.

The USLSS began its search for new leadership after a series of failed rescue attempts and corruption within the stations. Etheridge’s inspector, Frank Newcomb, was impressed by Etheridge’s work ethic and wrote a letter to the superintendent of the USLSS, recommending Etheridge take over as Keeper.

“[T]aking him all in all, [he] seems to be a superior man for the position,” Newcomb wrote.

Soon after his promotion to Keeper at Station 17 in 1880, the four white surfmen on his crew quit. Etheridge filled those positions with other African American surfmen, becoming the first all-black crew in Life-Saving Station history. Etheridge drew from his military background and pushed his crew members to train with military discipline and precision. In May 1880, Etheridge and his crew faced another type of storm when arsonists set fire to their station. Etheridge did not let this threat get in the way of his mission - to train and led a confident and capable crew. 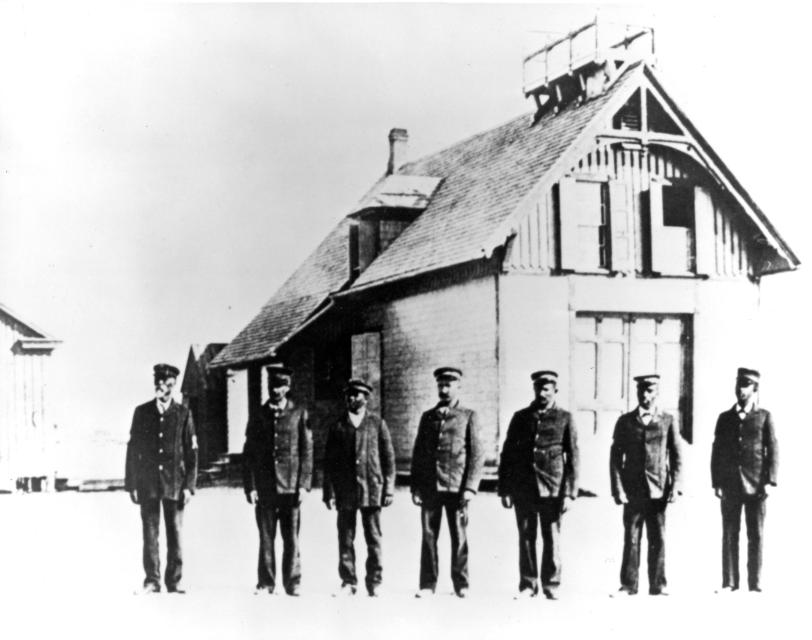 All of their hard work and training did not go unnoticed. The crew gained the reputation of "one of the tautest on the Carolina Coast," after numerous heroic saves along the Outer Banks. Their most well known rescue was saving all of the crew members and passengers aboard the E.S. Newman. Etheridge penned in the station’s logbook: “Although it seemed impossible to render assistance in such conditions, the ship wreck crew was all safely landed.”

Etheridge continued to serve as Keeper up until his death on May 8, 1900. His fellow surfmen wrote in the station’s weekly log: “Keeper Richard Etheridge died at this station at 10 minutes to 7 o.c. a.m. today. Disease, likely carried by the mosquitoes from the sound, did what no war, rescue attempt, or human hostility could.”