History of the Roanoke Voyages

Sir Walter Raleigh, a charismatic English courtier with a fortune to invest, pleaded with his close friend, the Virgin Queen Elizabeth. Finally, she granted him an exclusive patent to establish a colony in the New World in 1584. He speedily arranged two ships, and in April of 1584, Captains Amadas and Barlowe sailed west to survey the land.

On July 4 of that same year, the English sailors sighted North America. They landed on July 13 at an inlet near what is now known as Oregon Inlet. The men explored the region and discovered Roanoke Island positioned between the Outer Banks and the mainland of America. They thought the secluded island could serve as a military and pirate base, and eventually, provide the ideal setting for a permanent English colony. Ultimately, the Englishmen and their illustrious Queen aspired to break the flourishing Spaniards from their connection to the riches of the west.

Amadas and Barlowe returned to Europe with more than stories of a “fruitful” island paradise. The captains left Roanoke Island with two Algonquins, Manteo and Wanchese. Once again on English soil, the explorers, along with the help of Sir Walter Raleigh, promoted the New World as a land of infinite potential. 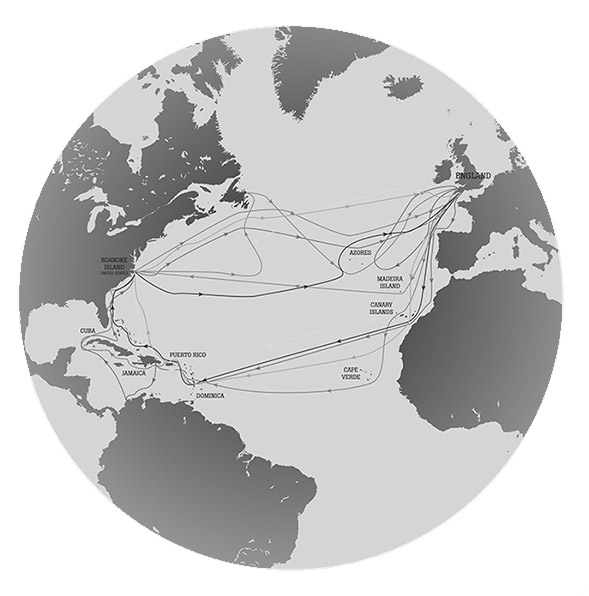 Settling in the New World

In the spring of 1585, seven ships sailed toward the promise of Roanoke Island. Sir Richard Grenville led the military expedition. Their mission was to establish an outpost for pirating and to prime the land for a permanent settlement. Unfortunately, the fleet lost most of the food provisions from the Tiger and was forced to send a crew back to England in pursuit of the supplies necessary to achieve their aims. Grenville traveled back across the Atlantic with roughly one hundred men, and left Ralph Lane as governor of Roanoke Island.

Lane’s colony rushed to construct shelter before winter. The main settlement was complete by September, only a month after their arrival. Men built houses from large posts, slanted timbers, and trenched wooden sills. Between the timbers, colonists wedged wattle and covered it with daub made from sand, clay and natural materials of the area. The men shuffled across dirt floors, and slept in elevated lofts. Relations with the Algonquians were initially friendly. Manteo and Wanchese had arrived back in their homeland safely from their adventure. However, as the winter months progressed, the cultures conflicted.

News of the delicate settlement would have reached England with Grenville in August; however, the conditions and safety of the colony were only trifles for the affluent financial backers of the expedition. From their perspective in England, making money through the efforts of sea-worthy pirates was of the utmost concern. For the small group of soldiers left on the banks of America, the outlook was grim. Their survival depended on the speedy return of supplies from their homeland.

When the infamous English sea dog, Sir Frances Drake, appeared in the New World in the late spring of 1586, the colonists took advantage of the ride back to England. Their provisions were nonexistent, and Drake could not resupply them because of a violent storm. Three men were left behind at the fort. The first English colony in North America had been attempted, abandoned and failed.

Sir Walter Raleigh proposed a new approach to colonization in 1587. A group of families including men, women, and children sojourned across the ocean with the intention of creating a permanent village north of Roanoke Island in the Chesapeake Bay region. For unknown reasons, the doomed colony settled on Roanoke Island instead of in present-day Virginia. In August of that year, the first English child was born in the New World. Infant Virginia Dare, along with the other colonists, suffered a mysterious fate. Governor John White left the island in 1587 and intended to return with provisions for the settlers. Fate stepped in and the Spanish Armada swarmed the English Channel. Queen Elizabeth I demanded that all English ships rally against the Spaniards and White was unable to return to America until three years later. When he finally reached the shore of the New World, the colony on Roanoke Island was deserted.