Born on Roanoke Island in 1921, Herbert Collins knew at a young age what he wanted for his future. “As a young kid, I would watch the surfmen come home and always admired their uniform,” Collins told the Capitol Area Coast Guard Retiree Council in 2008, “and I said to myself that I was going to get in the Coast Guard and Pea Island Station.” The Pea Island Life Saving Station was not only a beacon of hope for ships during rough seas. It was a unique branch of service where African American men were able to advance in their careers despite segregation and racial inequality. Collins’ family had strong ties to this station in particular. His great uncle served as a surfman under Keeper Richard Etheridge in the first all-black crew. His grandfather and father also served at the same station.

Life in the Coast Guard 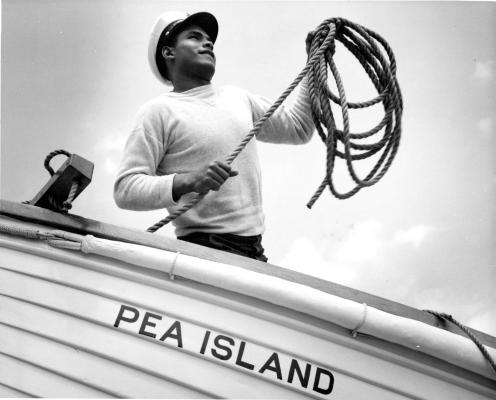 At the age of 18, Collins entered the Coast Guard as a mess attendant. Through his own hard work and determination, Collins achieved his childhood dream and was transferred to the Pea Island station to work as a surfman during World War II. He proudly served there as a surfman until the station was decommissioned in 1947.

Collins continued to diligently serve his country and was promoted to Warrant Officer in 1959, W-4 in 1968, and rose to Lieutenant in 1969. Collins was able to achieve all of this despite the strong racial tensions he faced during the integration of the Coast Guard. After 37 years of service, Collins retired as a Lieutenant in Portsmouth, Virginia in 1976. His family were recognized for holding the record for the longest continuous service by a family - a total of 96 years.

In remembering Lieutenant Collins, Admiral Thad Allen wrote, “Lieutenant Collins service to the Coast Guard and our nation alone is significant, especially in light of the challenges that African Americans faced as the service was integrated. Yet his legacy runs even deeper in our collective heritage as he was also the grand nephew of Dorman Pugh, one of seven Gold Life Saving Medal recipients from the Pea Island rescue of the crew of the stricken schooner E.S. Newman in 1896.”